Chemishield Recognised in the Engineers Journal 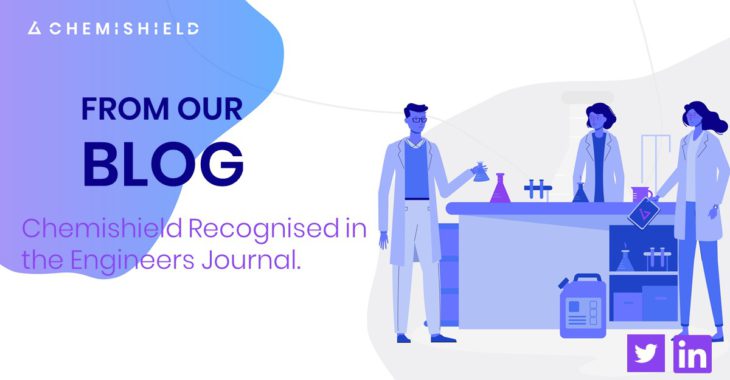 Kevin Walsh’s research carried at Waterford Institute of Technology has led to engineering consultancy Aphex developing  a revolutionary software for the safe disposal of chemical waste for the pharmaceutical industry.

The aim of this literature review is to critically examine current practices within the pharmaceutical/chemical industry regarding handling transportation and disposal of chemical waste generated. Despite rules and regulations for their use, storage and transportation, hazardous chemicals may be involved in industrial and transportation incidents at anytime and anywhere (Chen et al, 1997).

This raises the question of whether or not regulations and directives are effective tools in preventing chemical accidents from occurring. Also, what consequences could hazardous chemicals have on the environment if such incidents were to transpire?

Additionally, what type of impact do regulations and directives have on generators of hazardous chemical waste? What authority is responsible for ensuring compliance? What are the consequences of being non-compliant? Regulations and directives are put in place to safeguard human, animal and environmental health. The Environmental Protection Agency, the US Food and Drugs Administration (FDA) and European Union are the competent authorities for certifying that generators of such waste are held accountable for their actions.

However, what other barriers are in place to deal with protecting human, animal and environmental health? Defence mechanisms utilising screening techniques are being employed in order to reduce the amount of occupational injuries/deaths associated with working with chemicals because “human health effects are a result of varying durations of exposure to hazardous chemicals” (Musse & Aldrich, 2008).

Screening techniques such as the use of a virtual reality laboratory-based software package, optimising railway tank car safety design, the use of an Occupational Health Index, a Chemical Management Information System and Chemical Hazard Evaluation for Management Strategies (CHEMS-1) are being employed across pharmaceutical companies to act as a buffer and prevent occupational injuries/deaths from happening.

With the constant increase in the volume and types of chemicals and chemical waste, and to comply with government regulations, the use of a paper-based inventory system is no longer practical in relation to the purchase, use, storage, waste management, and disposal of chemicals (Santos et al, 2011).

Therefore, a move towards a paperless, electronic system is now being desired by pharmaceutical companies for all aspects of their operation, including the handling and documentation of chemical waste generated within a laboratory, because using a paper-based system has proven to be too cumbersome and archaic (Dües et al, 2012).

Consequently, a move towards lean methodology should be used to help eliminate waste regarding a process. Poka Yoke is a lean technique which states that a system should be created that will not allow the operator to make a mistake, helping to eliminate errors by correcting, preventing and drawing attention to them (Ohno, 1988).

What you have just read is an extract from my literature review from my fourth-year project at Waterford Institute of Technology (WIT) Department of Chemical and Life Sciences, authored over five years ago, which I’ll get back to in a moment. An awful lot has happened and changed since putting pen to paper.

First off, I’m now a homeowner, proud father, husband and entrepreneur running Aphex, an engineering consultancy business in the south east of Ireland, in Waterford. I graduated from WIT with first-class honours in pharmaceutical science and began my voyage in the pharmaceutical industry. What a journey it has been to date: our business has gone from strength to strength.

But let’s take a step back. What do we actually do? The pharmaceutical industry is, of course, highly regulated, with authorities such as the FDA hovering close by. So we provide expertise in the area of commissioning, qualification and validation of systems, equipment and processes to ensure clients satisfy and meet the requirements set forth by such regulators.

We essentially verify that stuff does what it’s supposed to – whether it’s a bioreactor working, down to a pipette being operational in a laboratory. Our expertise is in understanding client requirements and providing technical expertise, ensuring that documentation is audit ready and systems and processes are operational. We aim to be niche by taking the documentation work from the client site and working on it in our offices before providing it back to the client.

Pharmaceutical companies make medication. However, regulators like the FDA are only interested in the documentation ensuring that there is evidence to show that products are safe, are of the highest quality and are efficacious. So now that you know what we do, let me get back to the fancy academic writing at the start of this article.

Basically, what I demonstrated is that chemical waste-disposal is serious business and, despite there being competent authorities overseeing such activities, there are significant gaps in the process.

When I started out in the pharma industry during work placement prior to the literature review, I was indirectly involved in a lab accident. This was the genesis for the project. A laboratory analyst dumped chemicals into a waste container without thought for the compatibility of the chemicals when housed together. Think what happens when you put Mentos into a Coca Cola bottle.

Needless to say, the consequences were devastating. Equipment worth €200,000 was taken out of use and the laboratory out of service when the container exploded. The ripple effects reverberated around the company – reputational damage, lost time with the lab being out of service, product not being tested, thus not making it to market. Disastrous!

Now, imagine if someone had been injured, because lucky for my colleagues and I, we left the lab prior to the bomb going off. You see, it took time for the chemical reaction to occur in the container, causing a vapour to be created, building the pressure in the container where it eventually detonated, while nobody was around. To say this had a profound effect on me is an understatement. It really got me thinking. How could this have been prevented? What if I was blinded? Do I even want to work in a lab? So, I tried to engineer a solution and got to work in earnest.

Aphex and the Chemical Waste Solution

When, back in college, I explained what I wanted to do for my fourth-year project – engineer a software solution where lab analysts could not inadvertently mix the wrong combinations of chemical during disposal – it raised a few eyebrows, to say the least. Essentially, I was going to build a software solution where users could safely dispose of chemical waste after their experiments and a label would be generated for the waste container.

I was the chemical-waste binman for the ‘sciencey’ fourth-year chemistry projects. And you know what? It worked. Users had a login. When disposing of waste they would enter the chemical name and quantity, followed by other chemicals and quantities. If the combination was safe, the software permitted a label to be printed. If not, the user was forced to segregate the incompatible chemical into a compatible container by going through the same workflow. The user received an error message to inform of the danger.

So what was the end result? All of the chemical waste was segregated based on compatibility and there were zero accidents – which, in an academic lab of 20-plus students over a three-month period, with a litany of numerous types of chemicals, was a significant achievement.

But what I also demonstrated was a report, generated from the software, detailing what was disposed of during the three-month period. Additionally, as the software had a full-blown audit trail, we could identify all users, when they used the system and the container they used, including the chemicals they disposed of.

Over the past five years of working in the industry, it has become evident that a paper-based inventory system is no longer practical in relation to the purchase, use, storage, waste management, and disposal of chemicals. We have been able to cultivate the expertise within our organisation and have fused that with my own personal experience which I’ve described to create a software solution that will revolutionise how chemical waste is handled and disposed of in laboratories throughout the world.

We have taken our older and clunkier beta version, used in the fourth-year project, and have brought it forward where we have stripped it down in conjunction with the Telecommunications Software & Systems Group of WIT. Our presence in the pharma industry has allowed us to see that there is no such offering in the industry for a chemical waste management system.

To date, we are approaching the software build where we are going to streamline our offering, make it more user friendly and incorporate the invaluable feedback that we have received over the past year. Being cognisant of not giving too much away, we are sure that in 2017, this will be a game changer.